We have covered in prior blogs the operation of batteries in smartphones. The vast majority of such devices use single-cell batteries. In other words, there is one physical cell that is the battery. As such, it has a given charge capacity measured in mAh or Coulombs, and it has a voltage range that is between 3.0 and 4.35V. If we stack multiple cells in an electrical configuration, then in principle, one can obtain a multi-cell battery configuration, called a pack, that can deliver more charge capacity.

Now let's examine what happens if the cells in a multi-cell pack are not identical. For example, they could be slightly different from the onset, or perhaps aged at different rates. In a parallel configuration, the voltage is always equal for both cells. Any difference in charge capacity between the cells will manifest itself as a difference in current in the two branches. In particular, this parallel configuration always guarantees that the cells do not exceed their maximum safe voltage, often 4.35V.

But a series configuration creates a different and more challenging situation. The current is shared and equal to both cells, and hence, each cell will manifest a different voltage. Let's first examine the charging of two cells in series. If the two cells are truly identical, then they will reach their maximum capacity and their maximum voltage at the same moment. But if there is a difference in capacity between them, then the cell with a smaller capacity will reach 4.35V before the other cell does. At this point time, one cell is 100% full while the other one is not. If the charging is not disconnected immediately, one cell will certainly get overcharged and cause a hazard.

To remedy this situation, electrical circuits called cell balancing are used. In principle they are simple They add a little switch and a small resistor across each cell in series. This added circuitry provides the ability to "bleed off" additional charge from the "strong" cell, so that its voltage stays about equal to that of the weak sister. This type is called "passive balancing." Naturally, this is not a very energy-efficient nor cost-efficient method, but at least it guarantees that the weak cell will not be overcharged. As we covered in prior blogs, lithium-ion cells, unlike lead-acid batteries, risk catching fire or exploding when they are overcharged above their maximum voltage, typically 4.35V for one individual cell.

Let's now examine discharging two cells in series. The figure below shows the voltage vs. charge curve for two similar but slightly different cells. They are both nominally 7,000 Coulombs (or about 1,900 mAh) but in reality, one cell is 7,200 Coulombs and the other one is 6,800 Coulombs. This is about 5% difference in capacity, and can readily happen in a pack without the proper precaution. 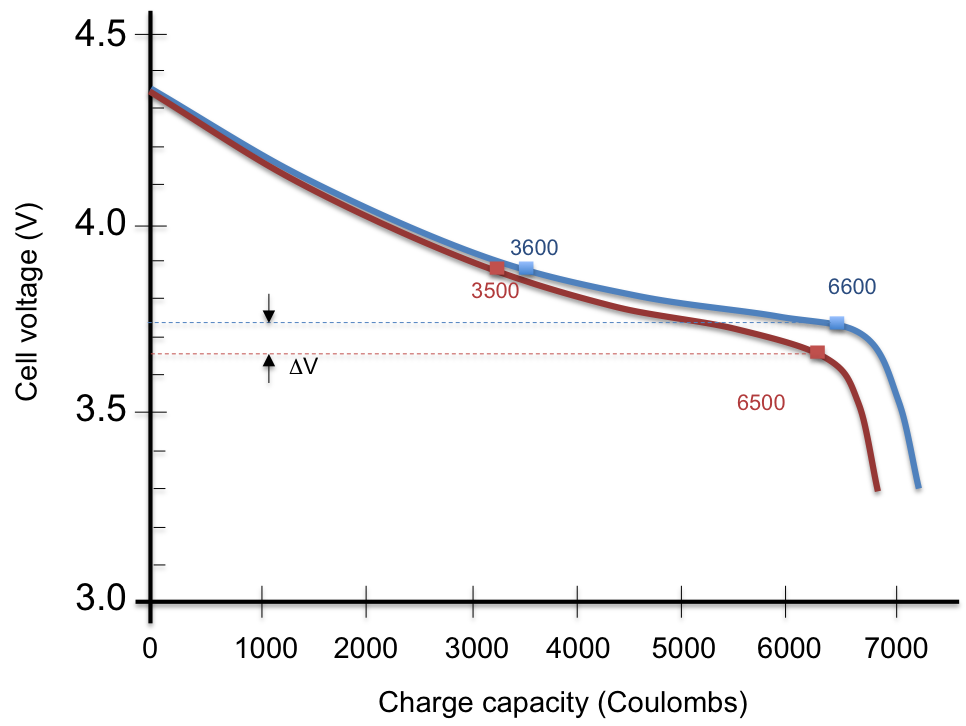 Let's now assume that both cells are charged to an identical voltage. For the blue cell, this will correspond to a stored electrical charge of 3,600 Coulombs, or about 100 Coulombs more than its sister cell. Let's now start discharging the cells in series; in other words, the exact same discharge current flows through both of them for exactly the same duration of time. This means that both cells will lose the same amount of charge; for the purpose of this discussion, we assume it is 3,000 Coulombs. We notice from the figure above that the blue cell will have a terminal voltage across its cells that is higher than the red cell (the more aged cell). Any further discharge will cause the red cell to drop precipitously and cause it further degradation, effectively over discharging the cell. This is not an unsafe event but it is a phenomenon where the weak cell (the red cell) will actually degrade at a faster rate in a series configuration. This is why it is always said that a "pack is only as good as its weakest cell." In other words, without the use of clever algorithms and balancing, the cycle life of the entire pack will be equal to the cycle life of its weakest cell.

Battery-pack manufacturers try to minimize this problem by matching the cells in a pack as much as possible. It is very common for pack manufacturers (including makers of electric vehicles) to measure the capacity of each and every cell in a pack, and matching the cells to within less than 1% in charge capacity. But as one will immediately observe, this gets very expensive especially for large packs as the yield of useable cells can be quite low.

In some extreme cases, some packs can utilize "active balancing." This includes more sophisticated electronic circuits that will actually shuffle charge from the strong cell to the weak cell. The effect is to increase the cycle life of the pack by shoring up this weak cell and ensuring that it does not get overcharged nor over-discharged.

It is important to close here by saying that the vast majority of mobile devices use single cell configuration, and hence do not implement cell balancing. Most laptop computers and some tablets use 2S configurations (two cells in series). They often implement rudimentary passive balancing. For example, the Apple MacBook series of products often use the bq20zxx family of fuel gauges with integrated cell balancing from Texas Instruments -- such consumer-grade fuel gauges can handle cell balancing for small packs up to 4 cells in series.